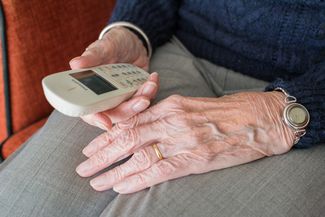 From NJ.com
Senior citizens who depend on Social Security income are the target of a growing phone scam aimed at bilking retirees out of their life savings.
A Cumberland County senior is one of the latest victims.
She didn’t want to share her name but she wanted to warn others about the scam. We’re going to call her Grace.
Here’s what happened.
Grace received a robocall message that claimed there was an investigation into her Social Security number. She ignored the message.


The scammer called and left a second message, and Grace was concerned enough to call him back.
A man who identified himself as a Social Security Administration officer answered the call in heavily accented English.
He told Grace there was a lot of criminal activity in Texas related to her Social Security number, specifically drug trafficking and money laundering. He transferred her to a supervising officer.
This person told Grace she needed to move quickly. Law enforcement was close to seizing her financial accounts, he said, and her Social Security number was being suspended.
“This alleged officer stated he wanted to help her and she needed to take all of her money out of her bank accounts and send the cash to him,” said James Matlock, director of the Cumberland County Division of Consumer Affairs. “Once he received the cash, he would secure it in a safe place and return it to her, in full, once the Social Security number suspension was lifted.”
The officer told Grace not to tell anyone about the money transfer - not even her husband - because they could both get in trouble, Matlock said.
Grace was scared. She was afraid that she could lose all of her savings.
She followed the officer’s instructions.
She withdrew $45,000 in cash from her banks. Per the instructions, she wrapped $20,000 in bubble wrap and placed it in a FedEx box, shipping it to a New York address. She did the same with the rest of the money, sending it to a different address in New York.
Next, the officer instructed Grace to clean out her IRA accounts. He would safeguard that money, too.
Grace contacted her IRA custodian and initiated the withdrawal, and the custodian withheld $45,000 for taxes.
It would take a week for her to receive the remaining $180,000 balance.
While she waited, the officer directed Grace to purchase $7,000 worth of gift cards from Target, Walmart, Best Buy and GameStop.
A LIGHT BULB
When the $180,000 arrived, again, per the officer’s instructions, she gathered the cash and the gift cards. She was going to mail it all to the scammer.
But on the way to send the packages, she paused.
She remembered meeting Matlock at a senior fraud presentation in 2018. She decided to call him to ask if she was doing the right thing.
“I immediately advised her it was a scam and stopped her from sending the additional cash and gift cards,” Matlock said.
He directed Grace to contact the local police and to put a freeze on her credit reports. Matlock also contacted the New Jersey State Police’s cybercrime unit.
While Grace didn’t lose the rest of her money, she’s still out the first $45,000. Because she mailed cash, it’s unlikely that her money will ever be recovered.
She’s also going to owe a tax bill on part of the IRA withdrawal.
Matlock is working with the companies from which Grace purchased the gift cards so at least she can get that money back.
PROTECT YOUR LOVED ONES
Matlock wants to remind us all that the government will never suspend your Social Security number. No representative from a government agency will threaten you or try to solicit money over the phone.
“Never, never give your Social Security number or personal information over the phone, no matter who the caller claims to be,” he said.
The scammers are tricky, and they’re able to make it look on your caller ID that a call is really coming from a government agency or from your local neighborhood.
If you do not recognize the number, do not answer it, Matlock said. If it’s important, the caller will leave a message.
Of course, the scammers did leave messages for Grace, and she did call them back. If you receive a message and you’re not sure if the call is legit, don’t call the number. Instead, look for the real number for the agency that’s allegedly calling you and you can confirm whether there’s a problem with your account.
Posted by Senior GO TO Guide