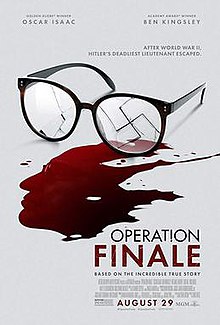 In 1960, the Mossad, Israel's intelligence service, discovers that Adolf Eichmann, an SS colonel who was a major figure in organizing the Holocaust of European Jewry, is alive and well in Argentina. The war criminal is living there under an assumed name, Ricardo Klement, with his wife and son and working as a foreman in a Mercedes factory. Operation Finale, written by Matthew Orton and directed by Chris Weitz, deals with what happens between the discovery and the appearance of Eichmann in Jerusalem for an eight-month-long public trial that stuns the world.

Israel's prime minister, David Ben-Gurion (Simon Rissell Beale), assigns a Mossad team the difficult task of abducting Eichmann and getting him to Israel rather than simply killing him. Ben-Gurion says: “If you succeed, for the first time in our history we will judge our executioner. And we will warn off any who wishes to follow his example. If you fail, he escapes justice, perhaps forever. I beg you. Do not fail.”

The Mossad team arrives in Buenos Aires and sets up a “safe house.” At least they hope that it will be safe. At the time anti-Semitism is rife in Argentina. For example, Carlos Fuldner, a repulsive Argentine official brilliantly played by Pepe Rapazote, delivers a pro-Nazi harangue to a cheering crowd in a beer hall.

But the team confirms Klement as Eichmann, and Peter Malkin (Oscar Isaac), a tough but soulful agent plagued by flashbacks—powerfully rendered—of the death of his sister and her small children at the hands of the Nazis, is chosen to waylay Eichmann and bring him to the safe house. The task proves surprisingly difficult. Though middle-aged, Eichmann's physical resistance to seizure is stronger than expected.

Malkin does bring the Nazi in, but more unexpected difficulties arise. Eichmann will have to sign a document personally in his real name in order to be transported, drugged and disguised, by commercial airline. Eichmann refuses to sign, and a cat-and-mouse game ensues for days between the German and Malkin, while Eichmann supporters and Argentine officials, such as Fulder, scour the city for him.

Malkin knows that torture will not work with Eichmann. The Israeli must find the right psychological button to push. The German proves as psychologically resistant as he was physically resistant. He says: “My job was simple: Save the country I loved from being destroyed. Is your job any different?” But eventually Malkin does find that button. You, of course, and the world, know the “rest of the story.”

Operation Finale, with its fine cast, always is of interest but does not always achieve the level of intensity that its subject matter calls for. There is a certain “check off the boxes” quality to it: grab Eichmann—check; cat-and-mouse game—check; fly out just before pursuers arrive—check . . . . But as a depiction of a key attempt to do justice for the victims of the “Final Solution,” Operation Finale is definitely a worthy work that deserves to be seen.

“Footnote” to the film: Oscar Isaac starred in 2017's The Promise, about the Armenian Genocide in World War I. Ben Kingsley played Holocaust survivors in three films of the 1980s and 1990s: Anne Frank's father, Oskar Schindler's assistant, and Nazi hunter Simon Wiesenthal.