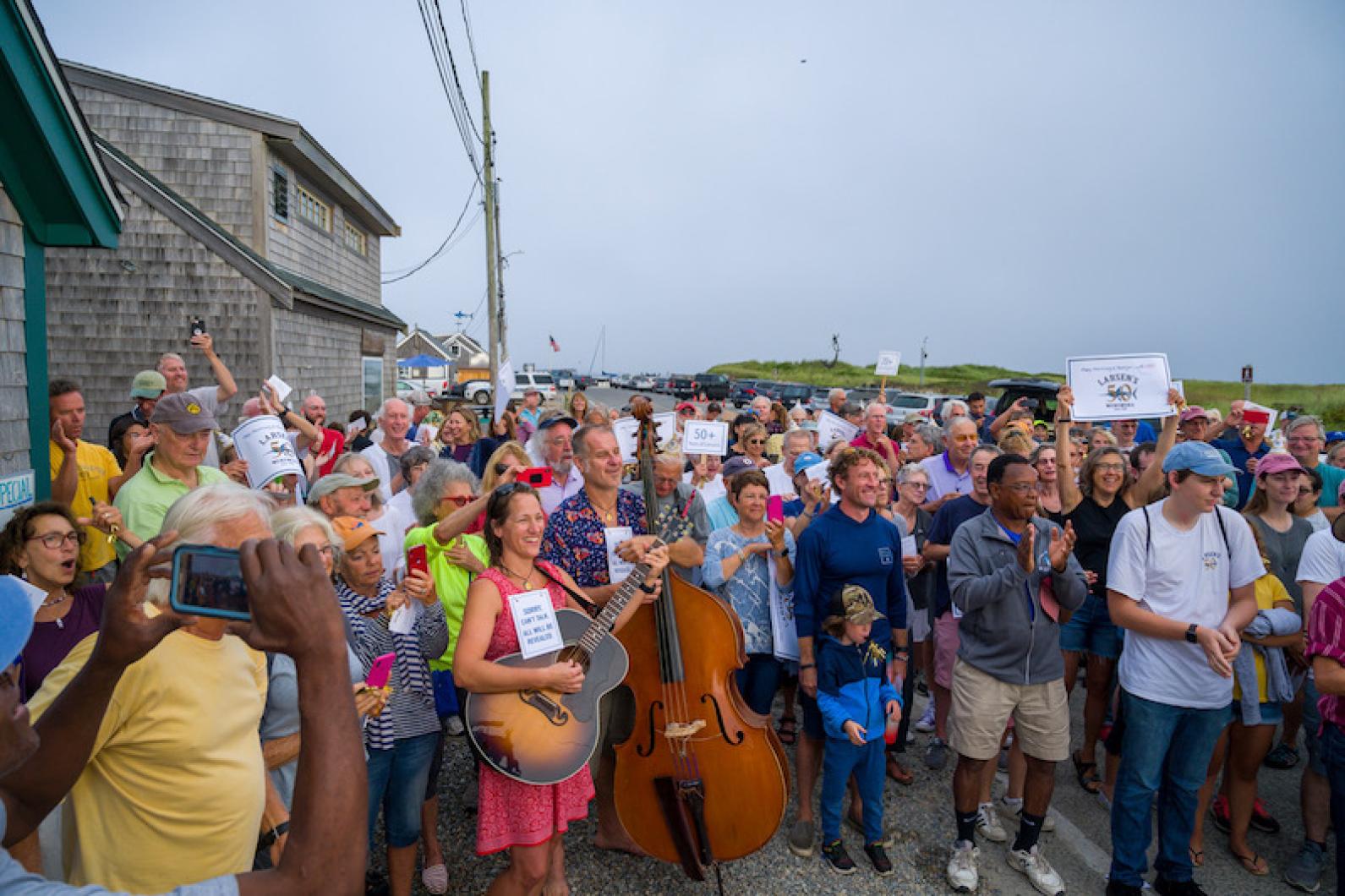 If you have visited Martha"s Vineyard and enjoyed any of the seafood you have benefited by the Larsen's
hard work and long hours.

This story is written by Will Sennott from the Martha's Vineyard Gazette. See the link below to read the full article on vineyard gazette.com.
It’s hard to keep a secret from the Larsen family, especially if that secret has anything to do with Menemsha harbor. But early Monday the family was pleasantly surprised by the flash mob celebration of the 50th anniversary of Larsen’s Fish Market opening its doors. 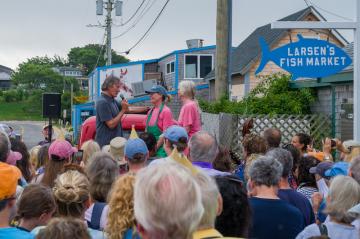 Betsy and Kristine Larsen were singled out for top honors. — Albeert O. Fischer 3rd
At 7 a.m., fish market owner Betsy Larsen and her sister Kristine had already sorted through a few hundred pounds of fish when a community parade of fishermen and fish-buyers flooded the Menemsha harbor. Led by the band Missus Biskis, the entire parade sang backup vocals to You Are My Sunshine as they marched from the beach toward the fish market.
“I really was surprised,” Betsy said. “I just couldn’t believe that anyone remembered.”
Fifty years ago was the Monday following Woodstock music festival, though Betsy said that wasn’t on any of their minds as their baby sister, Kimberly, was due any day; and their father, Louis, had just decided to transition from operating a fleet of commercial fishing boats to running a commercial fish market.
Like many commercial fishermen, Louis and his brothers had to constantly adapt to an industry that was always changing. They had built a national reputation for swordfishing, lobstering when there was a moratorium on swordfish, and trawling in the off seasons. As legend has it, Louis had trouble finding a distributor for his lobster and took to selling his haul straight from the boat off Dutcher Dock. A few years later, he decided to build his own fish market and forged the first competition against the Poole family, who once had exclusive control of the Menemsha fish-selling business.
“My father had a big heart,” Betsy said. “His biggest thing in opening the fish market was to treat the fishermen well after they had been out all day, tired . . . and to sell the best fish.” 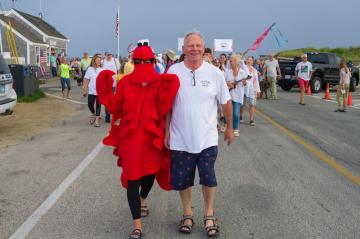 Louis Larsen came with a lobster of course. — Albert O. Fischer 3rd
Just as the Larsens of Louis’s generation gained a reputation as skilled fishermen, the Larsens of Betsy’s generation have gained an equally strong reputation as both fair and competitive wholesalers and retailers on the Island. The family tree today sprawls from the Net Result in Vineyard Haven to Edgartown Seafood and back up to the two markets off the Menemsha harbor.
“I was only nine when my dad first bought the store and back then I was probably more in the way than anything,” Betsy recalled. “But I really started working when I was 14 and running the place when I was 19.”
Over the past 50 years, Betsy and Kristine have developed strong bonds with the fishermen who sell them fish and the customers who buy it. And those connections were evident in the air of appreciation that surrounded the parade. Click here to continue reading.