"Anything that can go wrong, will go wrong." It's Murphy's Law.  He may have been in the audience at this weekend's RM Sotheby's auction of "the first Porsche."

To begin with, this little 1939 race car wasn't really a Porsche. That brand wasn't launched until after WWII. Ferdinand Porsche, who designed the vehicle, called it his"ancestor" Porsche. 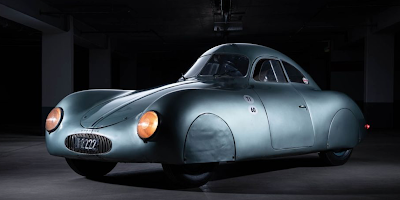 Produced to represent Nazi Germany in a Berlin to Rome race that was cancelled when war broke out, the so-called Porsche Type 64 is more like a Volkswagen, built on the chassis of what would become the VW Beetle and powered by a souped-up VW engine. Over the years the vehicle has been significantly restored and modified. Still, it's one supercool-looking pre-war race car.

On Saturday, August 17, the almost-Porsche was put up for sale, at an expected price of $20 million or more, at RM Sotheby's auction.

And so began "the biggest auction blunder."

This is the only surviving example personally driven by Ferdinand Porsche,” the evening’s emcee said, then announced that bidding would open at “$30 million,” a figure that was written on the front media screen of the auction theatre. Half of the crowd laughed; the other half cheered. After rapid bidding up to “$70 million,” with the crowd on its feet, iPhones raised, and cheering, the auctioneer announced that he had meant to say “$13 million,” and then “$17 million,” rather than 30 and 70. The media screen was quickly changed to reflect the $17 million sum.

Boos and shocked yelps and shouts ensued. People walked out.

At $70 million, the pre-Porsche would have been by far the most expensive vehicle ever sold at auction. At the actual final bid, $17 million, the reserve price was not met. So, no sale.
Originally posted on the Merrill Anderson blog by James L. Macdonal, Retired Senior Vice President.
Posted by Senior GO TO Guide